As a long time user of the original Pebble, I of course backed the Kickstarter for its successor, the Pebble Time.

I was briefly tempted by the Apple Watch but even though I am a bit of an Apple fanboy the cost was a too high for version one to tempt me. I might jump in on the next generation.

So having had the Pebble for a month now I feel like I can share some of my experiences.

I really like the styling on the new Pebble Time. The supplied strap is a black rubber thing, but I've switched it for a NATO strap. The face I've mostly been using recently is called 91 Dub v3.0 (pictured below). It's an homage to classic Casio styling, with infinitely customisable colour combinations. 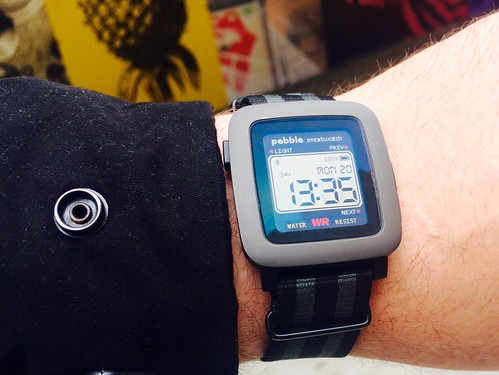 Another recent favourite is Trekv3, which is based on the classic Star Trek LCARS user interface concept. I keep that one for my more geeky days.

Overall the thing feels really good. It's plastic rather than metal (a Steel version is forthcoming) but for the price point that feels good. The 30m waterproofing and generally stable build makes me not feel precious about wearing it for most activities (e.g. the washing up).

This is something I was used to from my old Pebble but I have to say it's awesome having all of your notifications and alerts available on your wrists. There's a lot less need to get the phone out of your pocket (or in my wife's case her purse).

The only downside is that people you're speaking to might think you're bored when you keep looking at your watch.

I have to say, having my calendar on my wrist has made my attending-meetings-on-time stat rise from 60% to around 75%!

This is epic. I effectively don't worry about charge at all. I've been wearing the watch at night (see below) so I don't get a chance to charge it overnight, but that hasn't been a problem at all. I typically get 4-5 days usage before it drops to 10% battery, and I've learned that 10% means I just have to charge the watch some time that day.

Even when the battery hits 0%, the watch fails over to just telling the time.

I've fallen into the routine of charging the Pebble in the mornings when it needs it. If I notice it's on less than 20% when I wake up, I plug it in while I have my shower and breakfast. 40 mins or so later I'm ready for work and typically that means the watch is fully charged. This thing charges really fast.

I've not really needed to take a charger with me for short trips. On a 2-day jaunt to Munich for work I didn't take the cables and came home with about 40% charge remaining. This lack of charge anxiety is pretty refreshing for a consumer devices.

Gentle Wake is what's been getting me up in the morning. It's a basic alarm clock that supports different schedules for different days, and wakes you up by at first gently vibrating, getting more and more insistent the longer you ignore it.

The other nice feature is that it can monitor your movement for a configurable window of time before the alarm is due, and if you're moving around (and therefore awake) it will go off early.

I've really noticed a difference in how I'm waking up in the mornings since using this; the slight tickle at my wrist is enough to wake me when I'm only lightly sleeping, and on days where I'm sleeping more deeply it ramps up slowly enough that waking isn't a shock.

Timer+ is a fairly basic timer. It's main selling point is how simple the UI is, and how easy it is to start a quick timer.

I've been using this for timing cooking, timing talks, timing anything really. Having a silent alarm that doesn't attract anyone else's attention has been generally really useful in a host of different situations.

I use Tripit to plan my travel, so was very pleased to see the official Travel app syncs with it automatically.

This is really handy when at an airport; on my way back from Munich I got a flight delay pushed to my wrist while I was eating my currywurst so I knew I didn't need to rush.

This sort of thing makes travel a lot easier. The next step will be boarding cards on the phone, but at the moment only Air Berlin support the Pebble. Surely more will follow.

Another app I've been using way too much is the Transport app's Uber integration. A couple of keypresses gets me a car home, and my credit card is suffering as a result!

Some other apps I've regularly been using include:

OK so there have to be some downsides.

As an iOS user, the biggest problem is that a lot of the Pebble's functionality is crippled due to the lack of APIs on Apple's part.

One example is responding to notifications, on Android each notification can have a number of responses that you can activate on the watch. On iOS the only option is to dismiss the notification and get the watch out of your pocket to reply.

Another example is Voice Replies. This is enabled on Android, but again because of a lack of userland APIs is locked out on iOS.

Hopefully Apple will see the light and offer a way to integrate these functions, but with their own watch as a rival it's unlikely.

Overall the watch still does enough to be worth the cost, but it does make us iOS users feel like second class citizens.