2015 was the year I started submitting papers to conferences to try and get some speaking gigs. I expected to get a few acceptances but the actual response was really amazing.

I'd expected to not be accepted to many, so I applied to most of the conferences I saw that I could make it to. In the end my acceptance rate was about 40% so I ended up at seven conferences throughout the year.

That's not a lot by some people's standards but it made me feel pretty busy, especially as they weren't evenly distributed.

I was going to write about each conference individually but I fell behind, so here's a recap of my year.

It all started back in Feb at PHPUK, which I wrote about already so you may as well read about it in my previous post.

Overall it went well, and the positive feedback from this talk is what I credit with a lot of the later acceptances.

PhpDay was my first conference abroad, and was a little nerve-wracking because I didn't know anyone who was going. It was exciting to be invited overseas though, and the idea someone was going to pay for my travel just to hear me speak was really gratifying (although now I think about it that is a very good description of my day job, I guess it's that I was accepted as myself not as a representative of a company).

I decided to do a straight introductory PhpSpec talk, but looking at past talks I felt challenged by a slide-driven format. I think to understand TDD you need to feel the workflow, so I came up with a 'live-coding-like' animation format to show it. It felt like it worked on the day and I was pretty pleased.

Again the talk went well but for me the highlight of the conference was to get to know some of the other speakers a little better. There were plenty of late-night chats in the bar area and the organisers took us to a fantastic restaurant in Verona for the speaker's dinner. It was the first time in Italy for me so trying the delicious real cuisine of the area was great.

The whole conference had a friendly, open spirit that is sometimes missing at the larger conferences and I'm very much hoping to go again next year.

It wasn't completely out of the blue that I was accepted, after all I help to organise the conference so a lot of the selection panel were familiar with my work. All I will say though is that I didn't vote for my own talk!

On the tutorial day I co-delivered a DDD workshop with Richard Miller. It went well and I really enjoy presenting with Richard - we both don't prepare an over-rehearsed script ahead of time so it adds a certain spontaneity. We also don't mind interrupting or contradicting each other when we're talking which maybe adds an element of performance.

On the main day, what I tried to do with my talk was give an overview of what testing tools were available and which were most appropriate to use in different circumstances.

My agenda was really to stop people asking me 'which is better, PHPUnit or PhpSpec?'.

In the end I felt crammed for time and a bit disappointed with the final talk. It's got stuff in it that's valuable (and certainly got good feedback from attendees) but I felt like the overall structure wasn't in place.

I'm hoping to deliver this again in a modified form in future to have another crack at it.

The conference itself was great as always; the venue we use is in a stunning location and the social was well-attended. Because it was in London it was a pretty familiar environment for me so the main thing was catching up with people from out of town.

OK this was an exciting one to be accepted to!

This was the first pan-Asian PHP Conference, ably organised by Michael Cheng.

There was a live stream of the conference but I've not seen videos yet. I'll post here if one emerges. 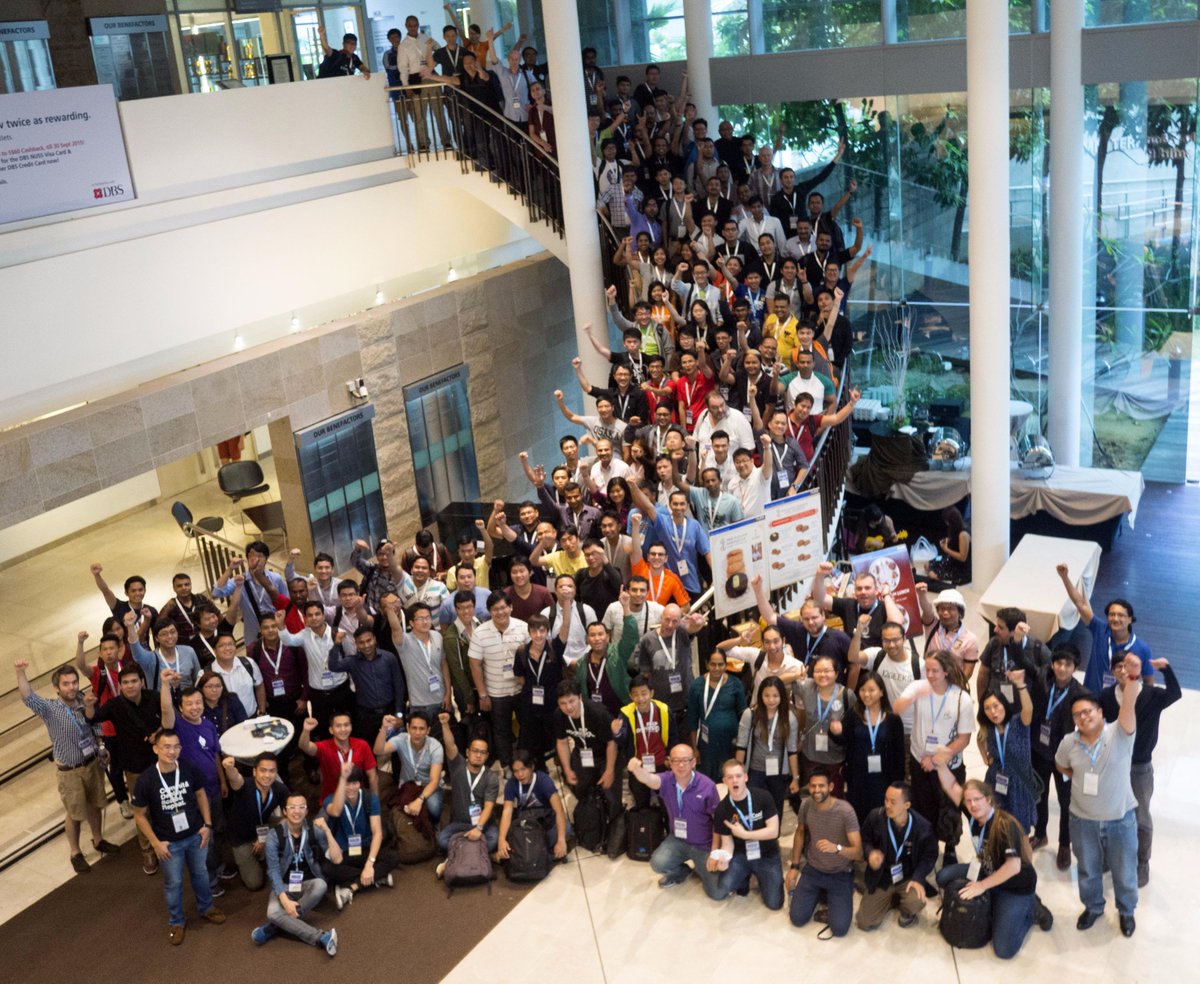 I was very pleased that Marek Matulka was also accepted because it meant I had a travel buddy who's similarly obsessed with frequent flying programmes!

The flight to Singapore was long and tiring but the conference was great. It was in the university and was the first time I've seen a conference audience sitting at round tables, dinner-style.

My talk was a reworking of the one I delivered at PHPUK. On reviewing the slides I found I didn't have to change much, I mostly normalised all of the examples into PHPUnit (I had a mix of different tools in the original which people said was hard to follow).

I was pleased with the way it went and I got some very effusive feedback from some of the attendees who'd never got into testing before.

I don't think I made the most of the social side of the conference - the jet lag was too much. If I go again I'll definitely try to arrive a day more earlier.

The hospitality from Michael and the other organisers was excellent - Singaporeans seem to love to eat and we were very generously looked after!

It was really special being at the first of these conferences. A highlight for me was during Jenny Wong's keynote she asked people who'd not been to a conference before to stand and it was at least 75% of the audience!

The PHP ecosystem is built on community so this conference could be the start of something big in Asian PHP adoption.

I'd not been to PHPNW but had heard good things about it from Inviqa people. It didn't disappoint!

I did a half-day tutorial about PhpSpec on the first day, and I used the animated presentation style I developed for my PhpDay talk with some extra exercises.

I was told a few days before the workshop that 20+ people had signed up, but when I arrived there were about 16 desks. I assumed there was some mistake, but people kept coming in until it was standing room only! Luckily an organiser managed to whip up some extra desks and the staff sorted the situation out very quickly.

In the end having that many people doing code kata in pairs was a great experience. 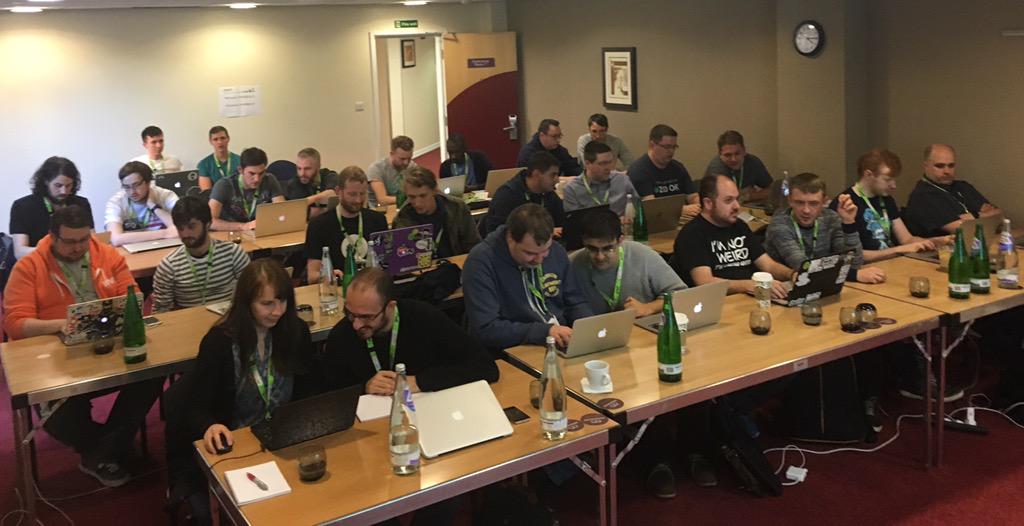 The talk I delivered on the main day was a new one about Modelling by Example. I actually had to put it together in a few days due to my bad preparation so the slides aren't very spectacular, but it's a subject that I've been thinking about a lot over the last year so the ideas came out pretty quickly. I've done the same talk since and haven't felt the need to change it very much.

I think this is the talk I felt best about this year; the feedback was really positive and it felt really natural to deliver.

The social side of PHPNW was good; lots of UK folk I know and a few out-of-towners. Again I left thinking I'd not made the most of it, I think I might just need to come to terms with the fact I find it hard to take part in conferences I'm also speaking at.

I was very pleased to be selected to speak here because it's co-organised by Chris Hartjes who is a big advocate of testing and we've had a fair bit of Twitter-based interaction.

Was nice to meet Chris but again jet lag and speaking nerves meant I was a bit withdrawn at the social events (at the speakers dinner I was furnished with one of the biggest steaks I've ever seen). 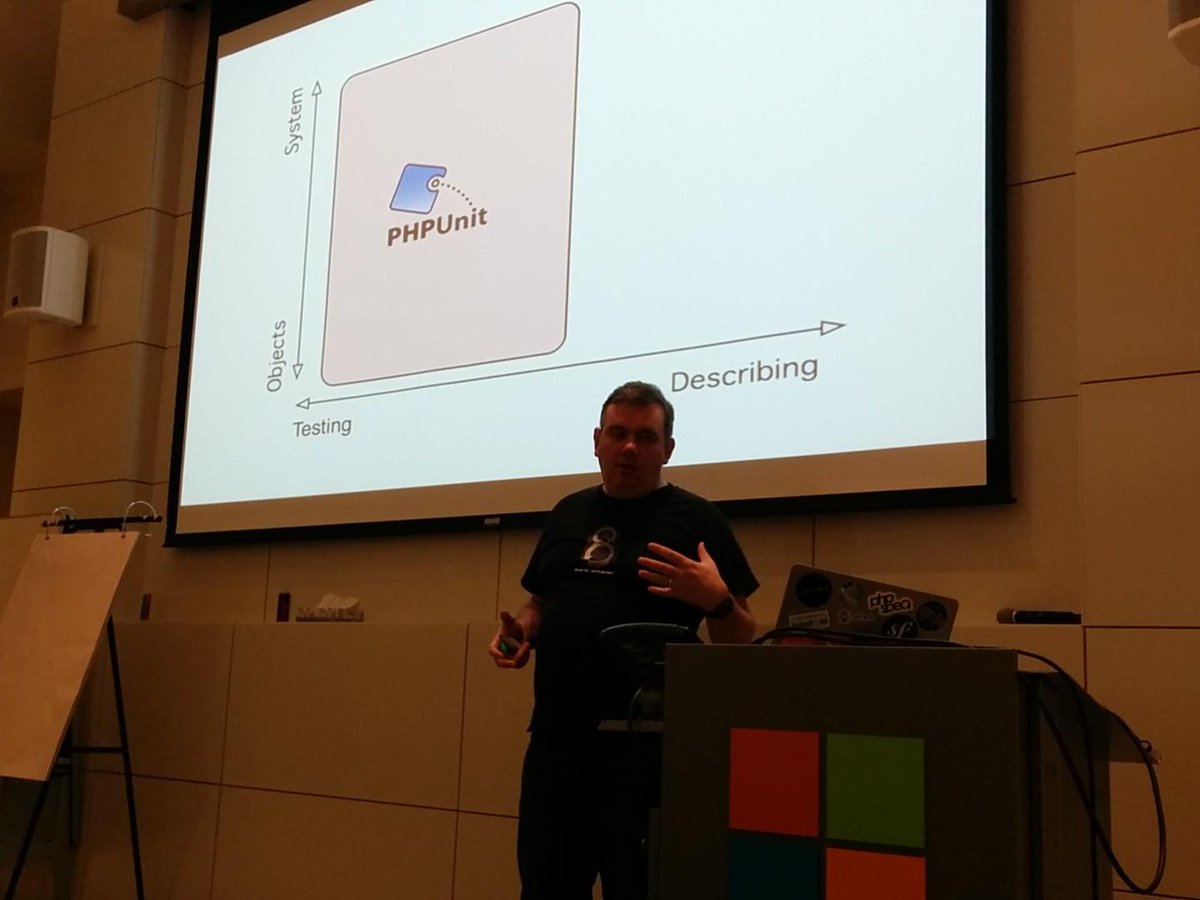 My talk was an introductory PhpSpec talk. I've found that I am familiar enough with the structure of the slide deck that I can deliver the talk in a fairly relaxed way and throw in extra bits and pieces as I go.

My only regret was I scheduled my flights to arrive quite soon before and leave quite soon after the conference, next time I'll try and give it more time so I can actually relax and see some of Toronto.

We were really looked after at this conference, which I really appreciated, including being ferried around between Airport, Conference, Social and Hotel by the friendly organisers. This made a big difference to my anxiety levels!

I was encouraged to apply to this by Kacper Gunia, who I used to work with with and helps organise the event.

In the end I did my testing talk from PHPUK and my Modelling by Example talk, both of which went down ok. They didn't need me to talk about PhpSpec because Kacper was doing a talk himself! I went to see it and it seemed good but it was hard for me to tell as he was speaking in Polish.

There was an incident at the start of my first talk that tested me a little - it took about 15 mins to get the projector working at the beginning (it was traced to the power switch being off!) so it was a little uncomfortable standing in front of an audience for that amount of time.

Trying to fix it: 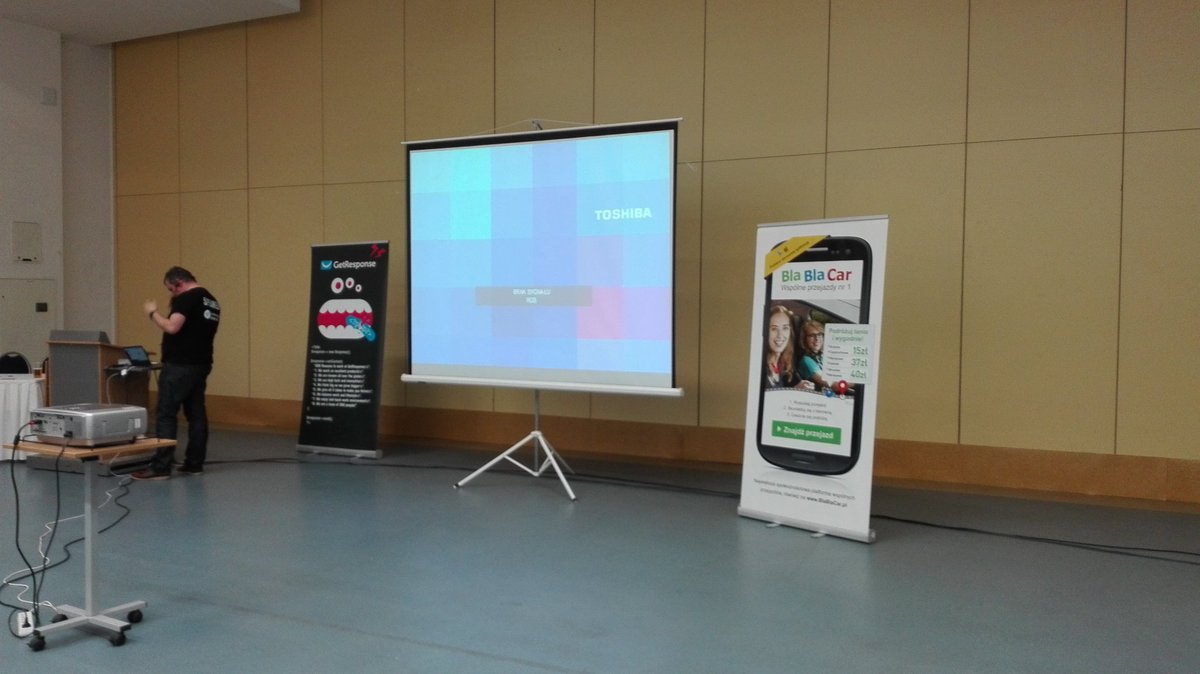 In the end I was pleased with how I coped; I think at the start of the year it might have thrown me off but I did ok.

The conference was held in a huge hotel out of town; it was a very pleasant place, unfortunately I forgot to bring my swimming trunks.

It's also the first place I've seen the audience of a talk drinking free beers at 10am!

There was less English content than I'd expected (partly because the English talks were scheduled against each other) so I'll definitely consider coming again as a delegate but probably not as an attendee.

After a year of trying it, I'm definitely going to be speaking at more next year.

I think in 2016 I'll try and get to more UK events, especially some of the framework-specific conferences outside my usual area (e.g. Drupal, Magento, Laravel conferences). I'd also like to go to a US conference if possible.

I was disappointed not to be accepted by PHPUK after getting such good feedback last time, but their acceptance process is blind so it's possible I just need to raise my abstract-writing game.

That said, the only conference I'm definitely doing next year is in Belgrade! I'd better start filling in those CfPs...

Thanks to everyone who supported me this year in my conference speaking, especially Marcello, Konstantin and the rest of the community of amazing speakers at Inviqa.

Thanks also to my wife Rosamond for not minding the disruption to our own lives too much!